RiversideTrailer is reader-supported. When you buy via our links, we may earn a commission at no cost to you. Learn more

I wouldn’t say I like the light bulb’s color temperature in my RV because it seems too dark for doing tasks in my kitchen. So, I was planning to replace it with a soft white color. It turns out the process is more accessible than I thought.

All you need to do is shut it off, open it up, and replace it with a new set of light bulbs.

Here’s a more detailed process on how to change RV ceiling light bulbs. 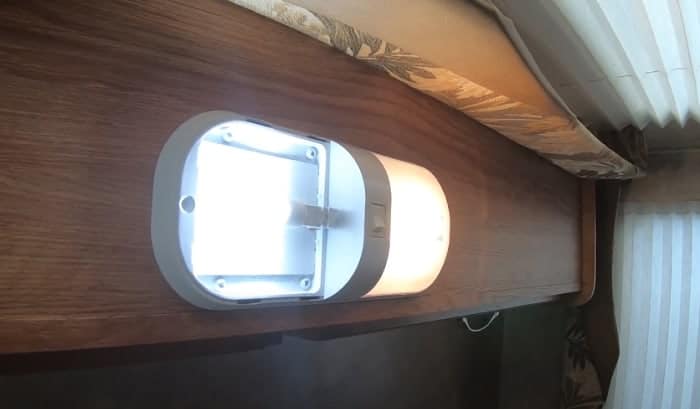 When your RV ceiling light is incandescent, you can change the setting to an LED light bulb for more coolness and less power consumption.

Before you try to touch the cover, you may want to turn the light off. The switch is placed at the center of the light fixture.

Once the covers are all pulled out, remove the old light bulbs and replace them with the new ones. 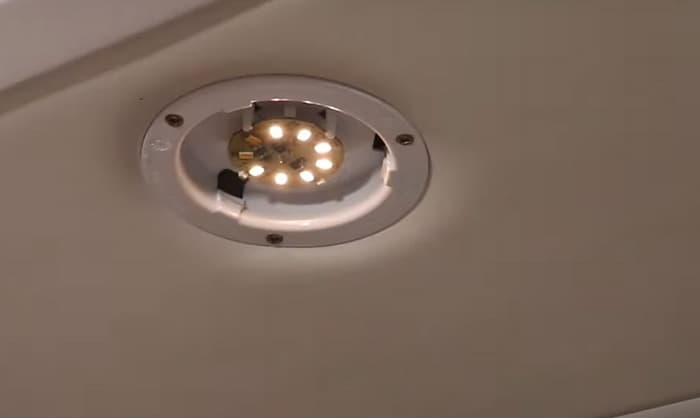 Replacing puck lights may look tricky because they’re hardwired into the ceiling. The good news is that they don’t look as hard as they look.

Puck lights might look intimidating with their cover and LED diodes, but it’s actually easy to take them out for replacement. Here are the steps.

At this point, you’ll see some hanging wires coming out from the ceiling.

There are two wires in an LED ceiling puck light-a negative and a positive. Also, there’s another set of two wires from the ceiling. All you need to do is to disconnect them from each other.

Get your replacement interior light, and it’s time to rewire it to the ceiling. Rewire it exactly how it’s done with the previous light.

Watch this video to learn how this RV interior light bulb replacement is done properly.

Those dome-like LEDs are known for their long life and efficiency, which is why they’re popular among RV owners. Replacing RV interior lights with LEDs only takes a few steps and tools.

The first step of this RV interior light bulb replacement process is to remove the old light from the ceiling.

Normally, these lights are soldered together with butt connectors. To make future connections more accessible, try to replace them with quick disconnect fittings.

Now it’s time to connect each wire. This is easy, provided that you have installed the quick disconnect.

Now that you have learned how to change RV ceiling light bulbs, you’re one step ahead of being a reliable RVer. All you need is a few tools, like a screwdriver or pliers. Simply remove the cover and the old light, then replace them with a new one.

Let us know what you think about this tutorial. And share it with your friends if you like it.

Okay, so I’m Philip Lopez. I join Riverside Trailer as an editor, where I will be doing research for both content and reviews. I contribute to studies aimed at understanding the most typical problems encountered by RVers on the road. I also keep up with the newest RVing gadget innovations so that I can promptly evaluate and recommend the best options.